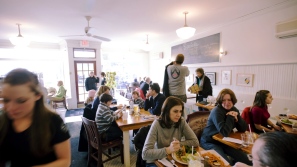 So I took a drive to Mattituck today, still on North Fork of Long Island, but more vineyard than harbor. There’s a restaurant there called Love Lane Kitchen, where high-school-aged kids in black t-shirts serve crazy-good food. (“What can I get you?” the blond waitress with the teeth so just off braces that you can still see the braces there, asked. “Um, I think I’ll have the mango and avocado salad,” you say, a little unsure because it’s 9:30 in the morning and you’d really like the stuffed french toast. “Oh my God!” she says, as if she’s just been asked out on a date by Dom*, but is probably just being nice because she sees your dilemma, “That looks so good!”)

When I left, and was walking to my car, not one but three old men said good morning to me. None of them were using walkers or driving in motorized wheelchairs, but pretty much all of them were hunched over and walking like they had glass stuck in the bottom of their feet, and like the beachballs under their shirts were pushing on their belt buckles and making them have to pee.

It was nice of them to say good morning, and I liked it, but, because it was me, I still had to start imagining that if we actually had a conversation, I’d discover they were all three horrible, arrogant, Republican windbags. I tried to change the channel on my mind, and imagine them as brilliant artists—men who would entertain me over good Italian espresso by making delicate origami animals, but I couldn’t get the windbaggery out of my mind. (“I’m burning, I’m burning!”)

Just about then a woman walked by me in her Spandex clothes and her fanny pack—she was older than you, but not much older than me, and so she was a little bit chunky—and she said “Hi!” as if she’d just taken the same drug I had, and knew it. O.K., so people out here are charming.

It reminds me of when Maud and I had just moved to Nova Scotia from Brooklyn, and the waitress at the local Greek diner came over and was asking how we were, in a characteristically super-friendly Haligonian way. (In Halifax, talking about the weather is a really, really nice thing to do.) Maud, who was maybe not quite fifteen, said, “What’s wrong with her?” Exactly. I got her out of New York just in time.

Probably a day or two later, we were invited over to a friend of a friend’s house, and all the dharma-brat girls around Maud’s age were invited over too. (Halifax, in case you don’t know, has a very big American-ex-pat Buddhist community.) The next thing I knew, she was getting in a car with five teenagers with experience in altered states through meditation, all waving and smiling, and I barely saw her again for the next three years.** I’m pretty sure she was out asking people how they were all over the place.

*Hi Maud!
**That’s a total lie. A lot of Amy’s pizzas (plain), and a large variety of cereals, were consumed in our house.