When I don’t write to you, you can bet that I’m lost—speeding down some road I shouldn’t be on with a Quarter-Pounder in one hand and a shotgun in the other, empty cans of wine in the backseat.* You know how it is when, instead of doing things that make you happy, you do things that don’t make you happy for money or status or security? 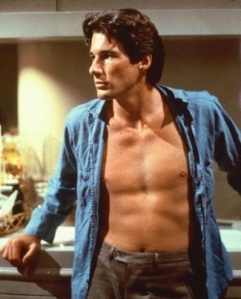 This is actually quite a serious subject, but right now I want to apologize for not coming around, and also start this new category, Sexy Dreams with Famous People. Julia actually came up with it, though she says she’s more sympathetic to its sub-category: Sexy Dreams with Famous People Who Aren’t Sexy. I dream about Richard Gere, you see, and she dreams about Steve Buscemi.** She, however, does not find herself driving down a dark road with a Whopper and a shotgun, so maybe we’re even. I’d take a sexy dream with Steve Buscemi over the waking sell-out anytime.

About the dream: I will spare you the details, except to say that we were in a fabulous Japanese restaurant—all sleek and low-wooden—where the proprietors were falling all over each other to get Richard Gere comfortably situated. I was sitting across from him, and he was playing with the tag of the expensive, black Donna Karan bra I’d bought that day [in real life]. I don’t know how he got the tag, because, in the dream, I was sitting across from him naked from the waist up.

The great thing about this dream, though, was that the tag was on a black string, and Richard was, for my amusement, untying the knot on that string with one hand. That was the sexy part—it was a slow and sure experience of untying. I said, “Where’d you learn to do that?” And he said, smiling his coy and sultry Richard Gere smile, “Superman taught me.”

P.S. I interviewed Richard once, for a Shambhala Sun story, but, before that, I had a strange and literally fantastic chance encounter with him. I wrote about this encounter in my Sun story, and I’ve pasted that excerpt onto the jump page, in case you feel like checking it out.

Me and Richard, from the Sun:

…The first time I met Richard Gere I was sitting on a park bench outside a train station in a picturesque small town I’d never been to in upstate New York…. I’d never met Gere and I didn’t expect to, even though we are both Buddhists, and even though I’d made my living as a celebrity journalist. I was, in any case, waiting for a ride to a dharma center, Karmê Chöling, five hours north, from a woman named Betty whom I hardly knew. Betty was 45 minutes late. It was a gorgeous fall morning, though—the day strikingly vivid and clear—so I didn’t mind waiting much. Then, as should always happen on particularly splendid day like that one, Richard Gere walked up and introduced himself. It’s true: he just walked up out of nowhere, in a baseball cap, smiling, very handsome, and said, “Are you Patricia?”

Well, I am Patricia, though nobody but my mother calls me that. In any case, I said yes, and he held out his hand and said, “I’m Richard.”

O.K. Sometimes life goes this way: tides of magic suddenly roll in. His face matched the day: full of cheer. I thought, how extraordinary that Betty would send Richard Gere to pick me up. The morning was perfect and getting more that way. He said, “You ready?” and I said, “Sure,” and he took my duffel bag and we walked to his shiny red pickup parked down the street.

Why was Richard Gere picking me up? Certainly he had better things to do. I said, “Are you going to Karmê Chöling?”

We were already in the truck, both of us still smiling, happy, it seemed, to be there on that day, and he put the key in the ignition. He looked at me, started up the truck, said, “No,” and put the thing in gear. I nodded. We started to roll backward, him looking in the rearview mirror to make sure there was no one behind him. Everything was easy, really nice. Still, I said, “But—you know Betty, don’t you?”

He stopped this time, and looked at me. His eyes were friendly, kind. “No,” he said.

We sat there then, two Buddhists, looking at each other, the day barely less perfect than before, just slightly stranger.

Then he said, “Are you a massage therapist?” I thought, oh shit. “No,” I said. There was a moment of silence, the sun shone through the trees, a bird sang, a person or two walked by. He said, “I was coming to pick up a massage therapist named Patricia for my wife.” There were so many possible replies, but I just said, “That’s not me.”

Thinking back on that day now, I don’t know what we did then—whether we smiled, or shook our heads or didn’t. I just know that it felt good to be sitting there with him, despite the grand faux pas. He said, “Here, I’ll help you with your bag,” and we stepped out of the truck, and he came around to my side and flipped my duffle out of the flatbed and onto the sidewalk. Together we walked back to the bench, where a woman was waiting. I said to her, “Is your name Patricia?” and she said, “Yes,” and she turned to him and he to her and that was that. They walked away. Betty eventually showed up.

4 thoughts on “Sexy Dreams with Famous People: Me and Richard”